Sophie picks me up in Detroit, and we drive the six hours or so to Cincinnati. Like most stretches of freeway across the Midwest, the sights are all an homage to driving culture: huge buffet restaurants next to even bigger shopping malls, an “adult play place,” and billboards selling insurance and conservative morality.

Sophie and I have spent a lot of time driving together since we became close friends in high school, and the introspective, philosophical conversations inherent to long rides in the darkening night come easily. We discuss where we are and where we’re going, two 20 somethings with no obligation to stay put, and then giggle over silly stories and bad jokes. We’re driving down to see Eddy, another high school friend, who studied violin at the University of Cincinnati College-Conservatory of Music, and stayed after he graduated to continue working on the music scene and to play with his band.

We pull up to Eddy’s house, a three-story building wedged in next to a police station. Eddy lives on the top floor, and the bottom two floors are used for his music program. He tells us this area is East Price Hill, which used to be a really nice area when the Price family still lived here.  It’s still not as degraded, however, as Lower Price Hill.

“The poverty rate in Lower Price Hill is around 40%,” Eddy says. “It’s one of the scariest places I’ve ever been. The poverty just strikes you.”

“What’s the poverty rate in Cincinnati in general?” I ask.

“About 30%,” he says. “Oh, wait, I thought you asked about Price Hill. The whole city in general? It’s much lower. Cincinnati has, per capita, the highest rate of millionaires in the country.”

“Yeah, especially the neighborhoods surrounding the city, like Indian Hill and Mariemont. Indian Hill, as a community, was the biggest supporter of George W. Bush in the 2008 elections, financially.”

And yet the biggest problem for Eddy’s youth orchestra group is money. MYCincinnati is a program that Eddy’s friend Laura founded just over a year ago and he joined, just after he had graduated from college, based on the lifesaving program El Sistema in Venezuela. The idea was to keep kids off of crime-ridden streets, away from temptation and out of harm’s way, and to give them skills that would help them succeed in other aspects of their lives: discipline, camaraderie, self-esteem. This structure, which has been replicated all over the United States (including SFSF’s base in Massachusetts) serves the same purpose everywhere, and is successful in turning out not only incredibly talented musicians, but also lowering crime rates and building more beautiful communities.

Eddy and Laura teach children how to play the viola, violin and cello everyday after school for two hours. Laura teaches the children who had never played a note on any of these instruments before joining the program, and Eddy guides the returning students, evidence of a successful first year. All of the instruments have been donated by a local violinmaker who simply believes in the program. 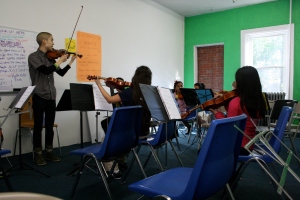 Sophie and I help out one day. Eddy puts us in charge of child-wrangling; basically, take the kids as they filter in, make sure they get their instruments and head to the correct orchestra. Eddy tells us that he and Laura suspect or know that many of the children have autism, Asperger’s, or some sort of condition that makes it difficult for them to function in social situations. One boy, who looks like a 9-year-old version of Benicio del Toro, refuses to let go of his stuffed beaver toy, and sits it next to him while playing. Eddy invites me into his orchestra room and introduces me to his musicians.

“Sarah and I grew up together,” he says.

“But I thought you were from China!” shouts one of the older girls.

“No, he’s from Minnesota,” replies a younger boy.

“But he looks Chinese!” she shouts.

Eddy quiets the rowdy musicians, then says, “My parents are from Korea, but I was born in Minnesota.”

“Oh, so they were immigrants?” shouts the same girl. “They came here with nothing but a suitcase and the clothes on their back! We learned about this in class.”

I talk with some of the kids at snack time, and realize that most of these kids are either immigrants themselves, or the children of new immigrants. Many are fluent in Spanish–immigrants from Guatemala and other Latin American countries, Eddy says. I ask them to teach me something, but they’d rather gossip with me about other students instead. After snack, one child sweeps up and the rest get back into playing position. Their parents start arriving, many mothers who just smile at Sophie and me, but when they speak it’s with a melodic foreign cadence.

The Happy Maladies, Eddy’s band, rehearse almost every day we’re there, and Sophie and I get to sit in while they perform. We sit on the bed in a room barely big enough for the four band members and their instruments.  I write down the first things that come to mind as they play:

Though he was always gifted at music, I never heard Eddy sing until recently. It gives me chills every time. I smile to myself, an inside joke with my memories of his love for Joanna Newsome and Bjork. He and his bandmates are all very down-to-earth, modest even after playing a complex original tune on the banjo or upright bass and harmonizing all the while.

Eddy’s friends move slowly and lightly, and smile frequently. Everyone seems genuinely interested in meeting his high school friends. When we’re not at a concert or helping with Eddy’s orchestra program, Sophie and I drink coffee and play board games and write. I begin to feel like I live here.

On our drive out of Cincinnati, Sophie and I pass an enormous statue of Jesus, arms wide enough to encompass all of His children doing 80 on the freeway, next to a flashing billboard. “OUR GOD…IS BIGGER THAN…OUR STATUE!” The tongue-in-cheek humor and laidback attitude of the Midwest, as conservative as it can be, is what gets lost in the headlines, and is what makes me love it every time I return.