“This is called, ‘urban prairie,'” Taylor says as we drive past yet another empty lot overgrown with rusty grasses. I look down the street and realize that these patches of overgrown city greenspace are actually the norm, not the anomaly as I had assumed before she pointed it out.

“There’s been a problem recently with wild dogs,” she says. “Wildlife attracts wildlife.”

We drive past abandoned houses, crumbled and crumbling, buildings with fire damage next to houses that look like perfectly habitable Midwestern homes.

“Are there a lot of house fires?” I ask.

“Yeah,” Taylor says. “The day before Halloween is called, ‘Devil’s Day,’ in Detroit. A lot of houses are set on fire, as sort of a gang initiation.”

“No, ones that people live in,” she says, and I can see that the pain it causes her to repeat this has hardened into heavy totem that she carries somewhere inside her lungs, to remind her when she speaks that this has never been easy for anyone to voice. We are walking around the Heidelberg Project, a series of reclaimed houses that stretch across two blocks in Detroit’s East Side, a neighborhood replete in urban prairie. The sidewalks, empty lots, and houses still standing are all part of the art, done by a group of local artists intent on reviving the community. 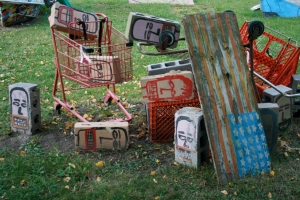 There is a lot of street art in Detroit, because it’s just so easy.  Land is ample.  So are canvasses.

I met Taylor my first semester in college, and we became friends over a shared interest in social justice issues. She moved to Detroit over a year ago to do Teach for America. She always wanted to be a teacher, and told them to send her to the place that most needed teachers, the place that others didn’t want to go. She currently teaches sixth-grade English. Outside of class, when she and her boyfriend, who also does TFA, are not debating the best teaching techniques, she takes her students out for hot chocolate and cheers them on at their football games. She’ll tell you it’s her job, but only about half of what Taylor does is actually required. She just knows that a lot of these kids need it.

“It took me a long time to understand that the people who live in these houses are severely impoverished,” she says, gesturing at beautiful old brick houses with scalloped awnings and long driveways. Her idea of poverty, coming from the West Coast, was much different. “In Seattle, poor people live in ugly high-rise apartment buildings. Here, everyone with money left, and all of these houses went up for sale. They look nice from the outside, but then you walk in and there’s no furniture. It’s really confusing.”

Poverty is different in places with space. Instead of cramming the impoverished into as small a space as possible in the center of an unsavory urban neighborhood, the city allows them to sprawl over unkempt land, live in large but dilapidated houses, away from any grocery stores or hubs of public transportation. Access to the city is still dictated by wealth, but that wealth is determined by convenience and crime rather than space or aesthetics.

I spoke with my father a lot while I was there. At first, he called to ask me how I was enjoying the Motown in Motor City.

One day, he calls to tell me the police chief of Detroit has just resigned. “They’re telling visitors to the city to ‘enter at your own risk,'” he says. “You need to get out of there, now!”

“Dad, I have no way of leaving. Sophie’s picking me up tomorrow and we’re driving to Cincinnati. I’m leaving then,” I say.

“Well, okay. Just don’t walk around any neighborhoods you don’t know by yourself at night.”

My dad grew up in a rough neighborhood. I grew up in a very clean suburb of the Twin Cities. Our city repaved a lot of the biking trails around the lake near my house when I was in high school. He says I don’t know what it’s like. I tell him I feel like I’m in a disaster zone. “New Orleans without Katrina,” I hear it’s been called.

At least, that’s how I feel when I drive through the city without stopping, without slowing down to see any of the community gardens that have literally sprung up in the wake of urban collapse, the bicycle cooperatives, the independent bookstore hidden in the basement of an organic restaurant, the churches and churches and churches, and, of course, the art.

Taylor lets me borrow her car while she teaches one day, and I explore the city a bit alone. I stop at all of these places. I talk to a woman at a bookstore that sells mostly books geared towards Detroit’s largely African American community, many of which incorporate spiritualism and religion into their discussion of racial politics in America. She tells me that the space also operates as an art gallery most days. She laughs a lot during our conversation, but it never seems forced. People on the street ask me how I’m doing. I remember how genuinely friendly people are in a lot of the Midwest; it’s just part of the culture.

And that was what Taylor always told me about Detroit: it’s been hit hard, yes, by a disaster of our own making, but the people who stayed, the people who couldn’t afford to leave and those who could but chose not to, are all working to keep  the energy of Detroit alive, to build and create and transform.  The city is now an incubator of innovation in almost every area of public life, and the people who live here aren’t giving up on themselves, or Detroit.

[If you’re interested in helping provide books for Taylor’s classroom library, check out her wishlist of books. Her school can’t afford to provide any for her kids, and her students truly feel special to receive these packages!]